The Legacy; political protest and the denial of history

Jacqueline Rose, Birkbeck Institute for the Humanities, University of London 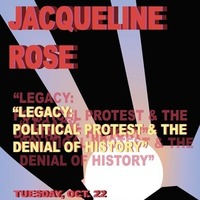 What is the legacy of a brutal political past?  How does it pass down through the generations?  At a time of persistent, or even growing, race, gender and class discrimination, and inequality, what does it mean to tell the young that they have been born free into a new world? What is the psychic temporality of protest? In this lecture Jacqueline Rose turns to South Africa to argue that, far from lifting the weight of history, such expectations lay an impossible burden on the children of the nation. How, she asks, might the psychoanalytic concept of the unconscious help us forge a path through some of these difficult questions as they press on our public life today? Drawing on the living archive of the University protests of recent years, on radical South Africa thinkers, alongside other voices from across the world who have struggled with a cruel history, she suggests that, as with the private life of the mind, only a continuous reckoning with the past, however agonised, can forge a path towards a more just and liveable future.

She is internationally known for her writing on feminism, psychoanalysis, literature and the politics and ideology of Israel-Palestine.  Her books include Sexuality in the Field of Vision (1986, Verso Radical Thinkers, 2006), The Haunting of Sylvia Plath (1991), States of Fantasy (1996), The Question of Zion (2005), The Last Resistance (2007), Proust Among the Nations – from Dreyfus to the Middle East (2012) and the novel Albertine (2001). Women in Dark Times has just been published by Bloomsbury. Conversations with Jacqueline Rose came out in 2010, and The Jacqueline Rose Reader in 2011. States of Fantasy and The Last Resistance have formed the basis of musical compositions by the acclaimed young American composer, Mohammed Fairouz. A regular writer for The London Review of Books, she wrote and presented the 2002 Channel 4 TV Documentary, Dangerous Liaison – Israel and the United States. She is a Professorial Fellow at the Institute for Social Justice, ACU, Sydney, a co-founder of Independent Jewish Voices in the UK, and a Fellow of the British Academy. Before arriving at Birkbeck, she taught at Queen Mary University of London as Professor of English, and in Autumn 2014, as Diane Middlebrook/Carl Djerassi Professor of Gender Studies in Cambridge.

Sponsored by the Jewish Studies Program/Leon Black Lecture Series, The Leslie Center for the Humanities and the Arts & Sciences Dean of Faculty