Sholem Aleichem: An Evening of Celebration 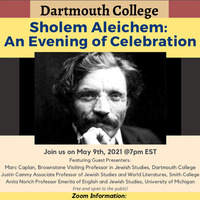 Sholem Aleichem (1859-1916) was the most popular Yiddish writer of all time, and one of the great comic writers in any language. Best known for the stories "Tevye the Dairyman," the inspiration for the Broadway Musical "Fiddler on the Roof," his death in New York City drew over 200,000 mourners, perhaps the largest public funeral in the history of the city. In his will he stipulated that friends and family convene every year to commemorate the anniversary of his death. In that spirit we will be meeting on line to celebrate his legacy and discuss his significance with a panel discussion, video clips of his work in performance, and a recitation of his final testament in Yiddish and in English.

Free and open to the public!